skip to main | skip to sidebar

Posted by Richard Wainwright at 10:50 AM No comments: 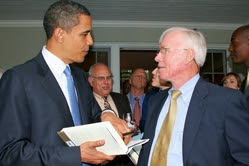 "Although never having taken much interest in politics, during the past six years, in my humble opinion, our government has been disasterous for our country and the world. Last year when Judy and I traveled in Asia for over two months and every person we met whether European or Asian said the same thing.

" We continue to like Americans but hate your president and his foreign policy. How could you elect Bush twice?" 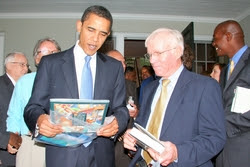 A peaceful and livable world is in jeapardy and I am deeply concerned that my children and my grandchildren will needlessly inherit problems that our generation could have at least lessened during our watch.

I have read both Obama's " Friends of my Father" and his "Audacity of Hope." He is a fine writer and his books well worth reading irrespective of one's politics. I have come to believe that he is a man who could do much for our country and his type leadership would help the U.S. return to the status of being an admired country by a large percentage of the world's populaton.
When Obama speaks to you as an individual, small group or one of thousands one can not but feel that he is speaking directly to you. When you speak to Obama you have 100% of his attention, interest and concern for the issues that are meaningful to you. I had the opportunity to speak with him for a couple of minutes and also give him two of my books for daughters Malia and Sasha.
Barack Obama has lived a fascinating life living in both the black and white world. I believe he understands both cultures and would provide a truly compassionate and common sense presidency."

Posted by Richard Wainwright at 12:21 PM No comments: